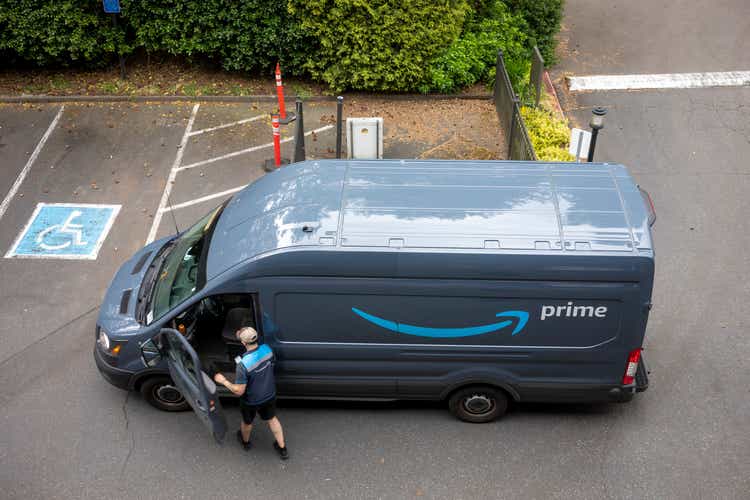 
If ever there was a company that learned the value of commercializing its own tools, Amazon (NASDAQ:AMZN) would be it. After all, the company famously adapted its own software-defined infrastructure and development tools (created to help power the company’s Amazon.com e-commerce site) into Amazon Web Services (AWS), the original and still market-leading cloud computing service. While it took several years before many people started to take notice, AWS has since become the company’s most profitable segment.

As Amazon launches its new Buy with Prime service, it appears to be taking a page out of the same playbook by leveraging the huge logistics infrastructure that it built to deliver goods ordered on Amazon.com and offering it to other online retailers. In the process, Amazon is sweetening the deal for Prime members by bringing the speedy delivery times and multiple return mechanisms that Prime currently offers for purchases made from Amazon to other sites. Quite honestly, it looks like a legitimate win-win.

All of this is being enabled by the enormous range of logistics resources that the company has been building up over the last years, including physical assets like warehouses, truck fleets, and airplanes, as well as all the people and processes necessary to make it all work. Close watchers of the company probably won’t be terribly surprised by the move, but it still feels like a big public step out into the world of delivery services and logistics.

Amazon has offered order fulfillment services (something they call FBA, or Fulfillment by Amazon) for more than 15 years – almost as long as it’s offered AWS. But until now, most of that has been hidden from the average consumer’s view, because it was only offered to online stores that wanted to store their goods at Amazon’s warehouses. With the debut of Buy with Prime, however, it’s the first time consumers can see and feel tangible benefits of the logistics legwork that has been going on behind the scenes for quite some time.

The way the service will work is that online stores that choose to work with Amazon will install a Buy with Prime Javascript widget into their e-commerce store for the products they choose to sell via this method, and that will create a button that automatically links back into Amazon’s customer information and payment structure. The result is supposed to “feel like” ordering direct from Amazon – including existing payment options, shipping addresses, etc. – but it will happen via the independent store’s site. All the normal Prime shopping benefits, including up to one-day free delivery, easy returns, etc., should make the actual transaction easier, but the site gets the benefit of working directly with customers and gets access to their information, including emails, so that these stores can follow-up with additional sales offers, customer service, etc.

Given the existing relationships and current product inventory in its warehouses that it has with online stores that are already using FBA, Amazon is going to initially offer the Buy with Prime service to those merchants. The company also said, however, that it plans to extend the service to other e-commerce stores that don’t currently work with them by the end of this calendar year. What this translates to for consumers is that the initial products made available via Buy with Prime probably won’t be much different than what they could get via Amazon.com, but it will be purchased via a different site. For consumers with particularly strong affinities to certain brands, that makes complete sense. Over time, the options will widen, however, through both the addition of new stores and the wider range of product options for companies that may sell a portion of their line through Amazon but also sell a more complete or more customizable set of options from their own stores.

For store owners and other sellers, the move obviously adds a number of potentially intriguing new options for order fulfillment, though not without costs. As you would expect, Amazon has several fees associated with the new service – on top of what they charge for FBA or other inventory management services – including a service fee and payment processing fee, among others. Sellers only pay for what they use, however, so costs are expected to scale with sales volume, meaning it should be viable for the millions of small businesses selling products online, as well as big brands that may be eager to shed at least some of their logistics costs. Of course, there will probably be some companies that fear the amount of perceived control and insight a big competitor like Amazon would have over their online sales, and some companies may balk at the fees. Clearly, the service isn’t for everyone. However, for many online merchants eager to reduce the friction involved in the ordering, fulfillment, and return process, Buy with Prime could prove to be very appealing.

As with AWS, I wouldn’t expect Buy with Prime and Amazon’s other efforts to monetize their enormous logistics expenditures to become an overnight sensation. At the same time, because of the huge amount of time and money the company spent on something that would be very hard for others to replicate, I wouldn’t be surprised if it eventually became another very profitable segment of self-created tools for Amazon. Plus, it’s bound to end up as yet another great business school case study on how to best leverage a company’s assets.

Disclaimer: Some of the author’s clients are vendors in the tech industry.

Editor’s Note: The summary bullets for this article were chosen by Seeking Alpha editors.