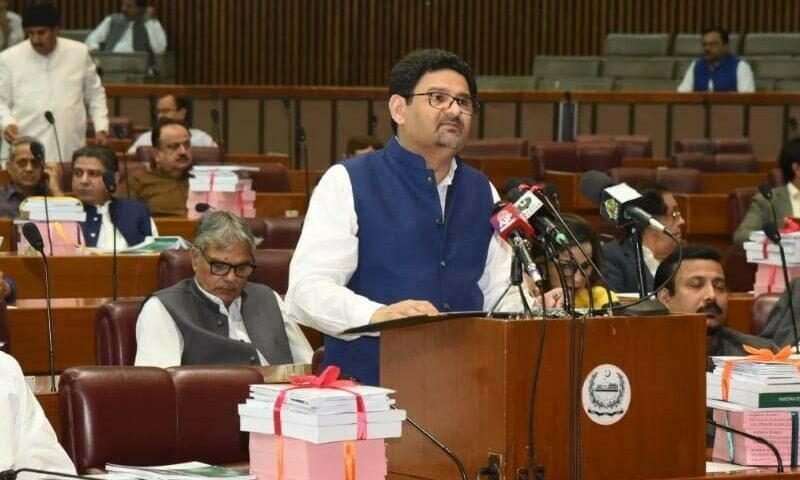 • Federal budget with outlay of Rs9.5tr presented
• Govt employees’ salaries up 15pc, no tax on those earning up to Rs100,000/month
• Subsidies on sugar, wheat flour proposed
• Taxes on cars over 1,600cc to be increased
• Pensioner tax reduced to 5pc from 10pc
• Advance withholding tax to be collected from those sending remittances abroad
• Tax on banking sector increases to 42pc
• Families with income below Rs40,000 to be given Rs2,000
• Households using fewer than 200 units of electricity to be offered loans on easy instalments to buy solar panels
• Tax-to-GDP ratio set at 9.2pc
• Rs699bn on targeted subsidies in new fiscal
• Defence expenditure at Rs1.52tr
• FBR target set at Rs7tr
• 2pc additional tax for those with Rs30m annual income
• Average inflation forecast at 11.5pc

ISLAMABAD: Amid ongoing negotiations to convince the International Monetary Fund (IMF) to release bailout payments, the PML-N-led coalition government on Friday presented a federal budget with a mix of real stabilisation measures sugar-coated with feel-good sentiment — the revival of petroleum levy with a bang, withdrawal of incentives for construction coupled with taxation on real estate and candies for government employees, income tax payers, industries and solar energy — and additional taxes of Rs355 billion to be collected by the Federal Board of Revenue (FBR).

“Economic stability is our foremost priority … we have to set strong foundations of economic development that is based on sustainable growth,” said Finance Minister Miftah Ismail while presenting the next year’s budget in the National Assembly, adding that economic development would be derived through from exports, particularly of agriculture, information technology and industrial products.

The most critical moves coming out of the IMF programme in the budget relate to an almost negligible change in subsidies (Rs699bn next year against Rs682bn in the current year) and a reduction in power sector subsidies.

That would mean the national average electricity tariffs would go up by more than 20pc with a cumulative financial impact of almost Rs1.5 trillion. The allocation for power sector subsidies for the next year is kept at Rs570bn against Rs596bn during the current year, a decrease of 4.4pc.

On top of that, a non-tax revenue target of Rs750bn has been set for the petroleum development levy (PDL), up almost 455pc from an estimated collection of about Rs135bn during the current year.

In the previous year’s budget, the PTI government set a Rs610bn target for PDL but later gradually scaled it down as global oil prices surged.

This means the current government would not only end the ongoing Rs10-23 per-litre subsidy on petroleum products but also start collecting PDL over the next year — a requirement to revive the IMF programme.

A key objective required under the Fund’s loan programme was to provide for Rs152bn (0.2pc of GDP) primary budget surplus (i.e. financial gap other than interest payments) next year from a deficit of Rs360bn (0.7pc of GDP) during the current fiscal year.

In his budget speech, Mr Ismail said the government preferred national interest over political capital and started taking tough decisions to bring the country back on track.

“The series of difficult decisions is not complete yet,” the minister said extempore while reading out of written speech, adding that “the primary deficit will be converted into primary surplus”.

The minister conceded that an increase in energy and fuel prices would stoke up inflation but said the government had no other option to reverse the “devastation caused by mismanagement of last four years”.

Another key step in the budget appeared to be a reversal of tax and subsidy-related incentives to the construction and real estate sector — pet programmes of the PTI government.

The budget 2022-23 earmarks only Rs500 million each for Naya Pakistan Housing Authority and mark-up subsidy on Naya Pakistan against Rs30bn and Rs3bn, respectively, in the current fiscal year.

The finance minister said it was one of the five top tax policy principles to impose a tax on non-productive assets and wealthy people to encourage entrepreneurship and investments.

He said Pakistan’s tax system had resulted in an artificial price hike in real estate, taking housing facilities out of the reach of the middle class.

The money generated from this dead investment was a major source of inflation and social disharmony, he said: “We don’t want to discourage the real estate sector, but we want to steer this sector in a direction where it can become the engine of growth for cities. Our proposals aim at encouraging construction and vertical growth and discouraging speculative investment in open plots.”

Likewise, the tax on transactions of immovable properties has been changed. As such, capital gain on all classes of assets is now proposed to be taxed at 15pc in case the holding period of such property is one year or less.

The capital gain payable on such assets will reduce to zero after a holding period of six years, reducing tax liability by 2.5pc with each subsequent year.

In the same direction, the basic threshold of exemption for business individuals and the Association of Persons (AOPs) was also enhanced from Rs400,000 to Rs600,000.

The government has also reduced the tax rate on profit from investment in Behbood savings certificates, pensioners’ benefit accounts and Shuhada family welfare accounts to a maximum of 5pc instead of 10pc at present.

For small retailers, the budget also provided a fixed income and sales tax regime that ranges from Rs3000 to Rs10,000 as the final settlement.

The finance bill facilitated the industrial sector by allowing 100pc depreciation for tax adjustment besides also allowing advance income tax adjustment on the import stage on goods into plant and machinery, raw materials, and finished goods.

Further relief has also been provided to the textile, pharmaceutical and film industries.

On the other hand, the finance minister also doubled advance tax to 200pc for non-filers on vehicles above 1600cc and increased windfall gain tax for banks from 39pc to 42pc that were earning secure profits because of huge investments in government securities.

Also, non-resident Pakistanis would also be required to become a taxpayer in Pakistan unless they were tax-resident elsewhere.

The budget also removed a 17pc general sales tax on the import of solar panels and their local supply and promised to provide easy banking facility to households for installing solar panels.

The overall size of the next year’s budget is estimated at Rs9.5tr, up from Rs8.487tr for the current year, showing an increase of about 12pc.

The minister said the biggest challenge for the government was to achieve a 5pc economic growth rate without an unmanageable current account deficit. The current expenditure for the next year is estimated at about Rs8.7tr, including the largest chunk of Rs3.95tr for interest payments.

The defence budget, on the other hand, increased by almost 11pc to Rs1.523tr against Rs1.37tr.

The revenue target for the next year has been set at Rs7tr against Rs5.829tr of the current year, showing an increase of 20pc. About Rs973bn would automatically accrue because of the almost 17pc impact of inflation (11pc) and GDP growth (5pc), while the remaining Rs355bn would be generated through additional tax measures.

However, the deficit at 4.9pc would be achieved with provincial governments together providing a cash surplus of Rs800bn. Otherwise, the federal budget deficit is projected at almost 4.6tr when compared to Rs4tr this year.

Non-tax revenue for the next year is targeted at Rs2tr, slightly lower than the current year and for the first time, after a long gap, about Rs96bn proceeds are targeted to be generated through privatisation.