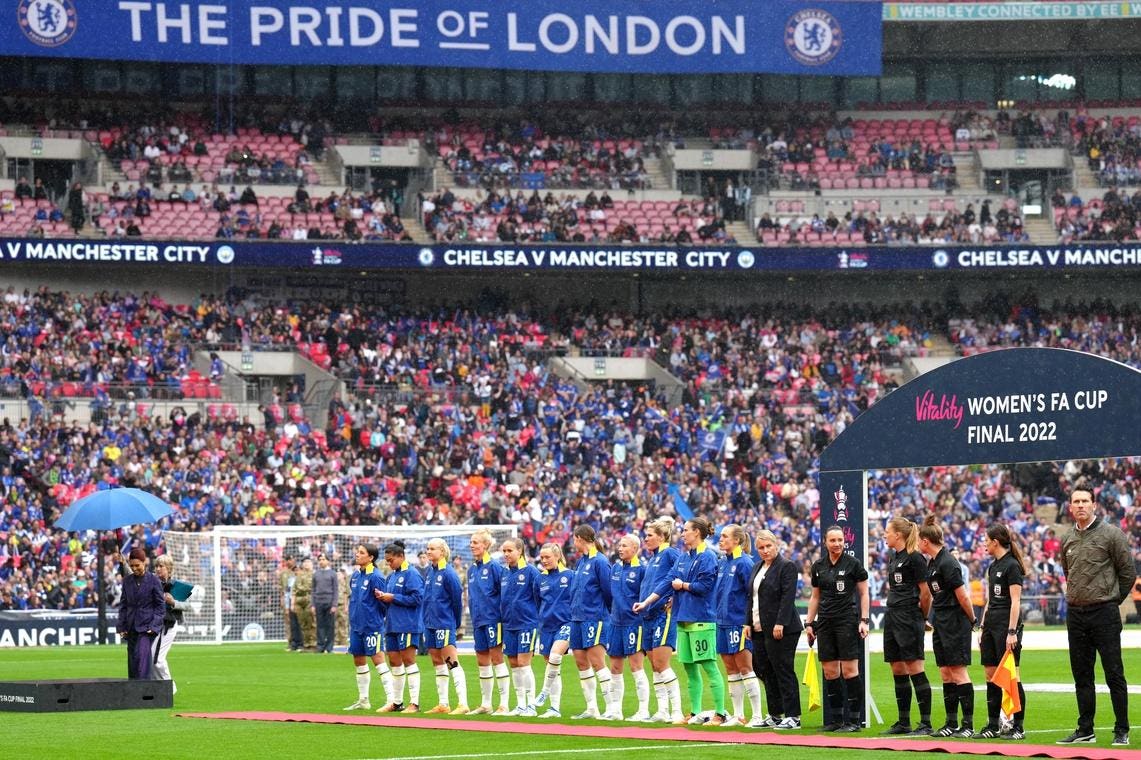 
Emma Hayes is convinced of the path to shaping the Chelsea Football Club Women into one of the best squads in the sport. “What we have to concentrate on is making sure that we have a top environment, where the players know there are no excuses in this culture,” she says. Hayes, the Chelsea Women’s manager, is sharing this thought in a pre-season meeting with staff, who are seated in a conference room overlooking the manicured pitches at the club’s training ground an hour’s drive outside of central London.

Hayes is focused on the team winning the domestic league in the upcoming 2019-2020 season. The prior run ended with Chelsea coming up short of trophies and qualifying for the UEFA Women’s Champions League, the prestigious annual competition that features the top club teams from countries across Europe. So, Hayes has sights set on winning the English competition because it would mean both adding a trophy to the club’s cabinet and a spot in the next Champions League.

The scene in the training ground conference room is an early one in the first episode of the “One Team, One Dream: This Is Chelsea” documentary series now airing on DAZN channels. Since then, Chelsea Women have won three consecutive FA Women’s Super League titles, two FA Cup titles, two League Cup titles, a Community Shield title, and earned an appearance in a Champions League final. Those achievements on the pitch are already known to viewers of the six-part, Alex Sunderland-directed series that follows the team from 2019 through 2021. What isn’t nearly as well-known or understood are the behind-the-scenes moments that show what it takes to get there.

The documentary explores the demands and decisions of top-level professional football, bringing viewers into team training sessions, bus rides, pre-game meetings, live match interactions, and players’ and staff members’ homes. It also reveals the changing nature of competition, especially as social and commercial opportunities have more clubs investing more money in women’s teams. A good pressure mounts for Chelsea players, staff, and front office executives when the women’s team is set to play a season-opening match at Stamford Bridge, the historic 42,000-seat home of the men’s team, before playing the remainder of the season at their 5,000-capacity Kingsmeadow ground.

Through it all, Hayes anchors the team in the commitment to developing the “top environment” culture. In a later part of the documentary, she and team staff institute a comprehensive health, lifestyle, and fitness program that advances the squad from performance development to player development. To do it right, she says, the mission is “to become world leaders in understanding women’s health.”

This kind of approach is familiar to people who have been observing Chelsea Women being built to world-class status, which started when club ownership and the board of directors began making substantial investments in the team in 2005 and then went next-level when Hayes was named manager in 2012.

In a conversation ahead of the 2019-2020 season, Hayes explained to me that the message she would impart to the team throughout the year would be about “being grateful.” To reinforce it from the start, Chelsea Women’s pre-season would include traveling for friendlies in France and Israel. The matches could allow Chelsea to help in further raising the profile of women’s football; in France, following on the nation’s successful hosting of the 2019 FIFA Women’s World Cup earlier in the summer, and, in Israel, working with charities to promote tolerance and understanding across diverse communities. During the FA Women’s Super League regular season, the team would continue its years-long work supporting the club’s partnerships with global children’s charity Plan International, Stonewall’s Rainbow Laces campaign for LGBT inclusion in sport, Chelsea’s Say No To Antisemitism campaign, and other activities run through the Chelsea Foundation. In Hayes’s design, these experiences meant something more profound than keeping up community relations—they were reminders of the personal and social responsibilities that come with the good fortune of being able to be involved in professional football at a top club.

There are many moments in the documentary that show Hayes as a tough, blunt taskmaster. She asks a lot of her herself, the players, and the staff, as a general rule and because there is a high standard set for everyone and everything associated with Chelsea. But the “One Team, One Dream” documentary also shows how and why Hayes’s style elicits the responses that are needed to bring a team to the top of the table.

Hayes is no authoritarian. What makes her an effective manager is her previously instilling a “duty of care” as a value in everything that players do, both on and off the pitch. This isn’t said explicitly in the documentary, but it is clearly exhibited. What we see, then, are examples of people reaching higher levels of performance through tough work and working because they know that those around them truly care for each other.

“One Team, One Dream” offers more than a lens on what it takes to be part of a top professional football team. And it offers more than a look at where the competition and business of women’s football is at and where it is going. What plays out throughout it is an example of the people and culture of an innovative, high-performing organization.

PrevPreviousBusiness 101: What Is Your Value Proposition and How to Go Around It?
NextBusiness Analysis, Analyst job with The MIL Corporation (MIL)Next