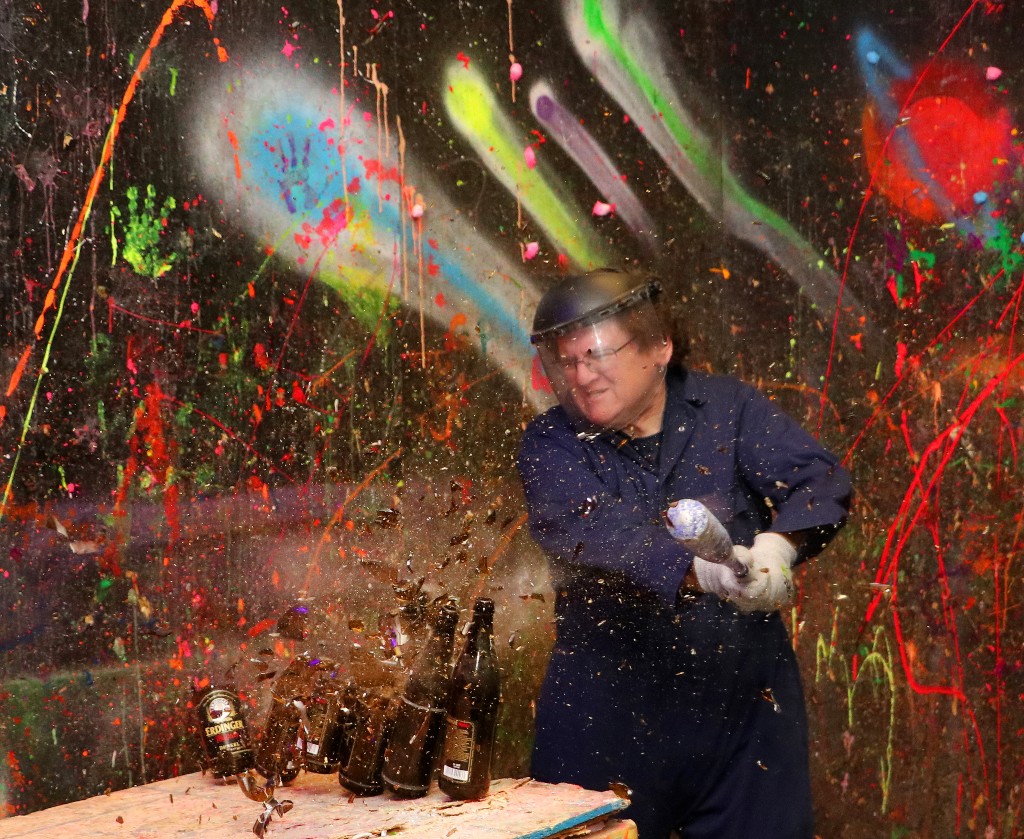 Batter up! Breaking beer bottles with an aluminum bat is far more satisfying than dropping them off at the recycling center. Rage Cage NH includes cleanup in all their smash room packages. Photography by Allegra Boverman

When I was a kid, I used to strap “Star Wars” figures to my skateboard and shove them down my hilly street when no there was no oncoming traffic. I harbored no hostile feelings toward Chewbacca or C-3PO, but every busted nose or tar-scraped limb from their forced Knievel-like stunts brought me pure joy.

Fast forward to current day, when I regularly toss glass into the dumpster at my town’s recycling center and enjoy listening to tomato sauce jars shatter into a zillion pieces. Yes, my asymptote line for entertainment is pretty low.

So imagine my delight when I discovered the relatively new Rage Cage NH, a “smash room” where you suit up in protective gear and destroy household furnishings, appliances and office equipment with baseball bats and sledgehammers until either the novelty wears off or you are out of breath. Located in downtown Nashua in a former Rent-A-Center, which sold the latest big-screen TVs and computers, the irony is delicious.

The Rage Cage is an unintentional metaphor for the ever-shrinking life cycle of consumer electronics. Indeed, the day I visited, owner Tedd Cherry was accepting a massive shipment of presumably broken flat-screen TVs. These giant TVs were stacked up like Pringles potato chips on nearly every open space on the carpet — and one of them would soon face my wrath.

After a decade working as an insurance agent (“People can be so nasty,” he says), Cherry had all the motivation he needed to open his unorthodox venue in February 2021. For a business themed around anger, his timing couldn’t have been better. There has always been road rage and holiday parking rage, of course, but the pandemic has ushered in new extremes of stress and anger that surface seemingly everywhere. A prime example would be the conversations on my town’s Facebook page, which typically begin with innocuous questions about missing kittens or plumber recommendations and often end with an invitation to “GO BACK TO WHERE YOU CAME FROM!”

Cherry does cater to angry clientele — if you text him a pic of an ex-boyfriend or ex-girlfriend, he will plaster their images on the appliances you’ll destroy — but he exudes the opposite vibe himself. Cherry cheerfully shuttles “fresh” broken VCRs and computer printers into the smash room like he’s handing out Halloween candy. And he giddily shows off the bubble machine in the paint splatter room with the enthusiasm of a kindergarten teacher.

“Our customers are people who want to let themselves go, enjoy the moment, and have fun. We don’t have a lot of Karens in here,” he says. “Most people come here happy and leave happier.”

I certainly fit that demographic. Although I admittedly can flash a bad temper, and have unhealthily clung to a few grudges in my life, I was pretty upbeat when Cherry handed me a crowbar and baseball bat. And I felt not a smidgen of resentment toward the ceramic pitcher or crystal vase he propped up on the sacrificial welding table.

As noted earlier, I think smashing glass is fun, but it doesn’t induce an adrenaline rush. It was only when Cherry offered me a 12-pound bowling ball as my “weapon” that I smiled like Wile E. Coyote. Before I walked into the Rage Cage, I never had any fantasies about breaking a TV with a  bowling ball. The idea had never even occurred to me. The only thing that could have made the opportunity more appealing would be if I could have dropped an anvil on the TV. Unfortunately, Cherry does not have any anvils in stock.

Spoiler Alert: Throwing a bowling ball at a flat-screen TV is anticlimactic. 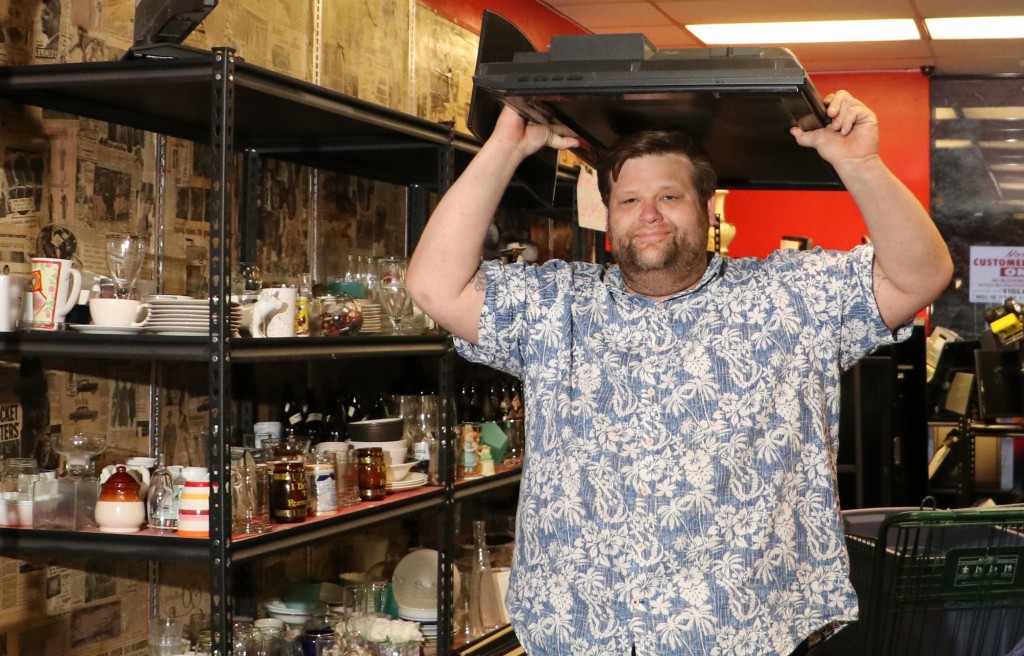 The first time I heaved the ball at the TV was a direct hit, but the glass only cracked slightly and defiantly deflected the ball off its chest like a soccer player. Two more solid hits didn’t inflict any serious damage, failing even to knock it to the floor. I felt like I was playing a rigged carnival game. I would imagine that the bowling ball would have embedded deep inside an old boxy cathode ray tube (CRT) TV, but the EPA has strict guidelines on the disposal of these relics.

Far more satisfying was the impact of a sledgehammer on an office printer. Unlike my pathetic efforts at destroying the TV, the printer instantly succumbed to my senseless aggression.

“It’s a workout,” says Cherry. “If you don’t come out sweating, you didn’t do it right.”

After the November 2021 closure of the Total Breakdown smash room in Somersworth, the Rage Cage is believed to be the only appliance-crushing space left in the Granite State. Cherry wants to broaden his business focus and also become a performance venue for local artists and musicians.

I don’t think I am angry enough to become a weekly smash room customer, but I would absolutely love to return with my co-workers on a future corporate team-building outing. Who doesn’t want to see the meek guy from accounting let loose on a retired washer and dryer? Give a co-worker a crowbar or croquet mallet and their hidden personality traits inevitably step forward.

“We get a lot of doctors, nurses and firefighters coming in as a group. A lot of therapists are also recommending us to their clients,” Cherry says. “It’s much better to release your stress in here than out there.”