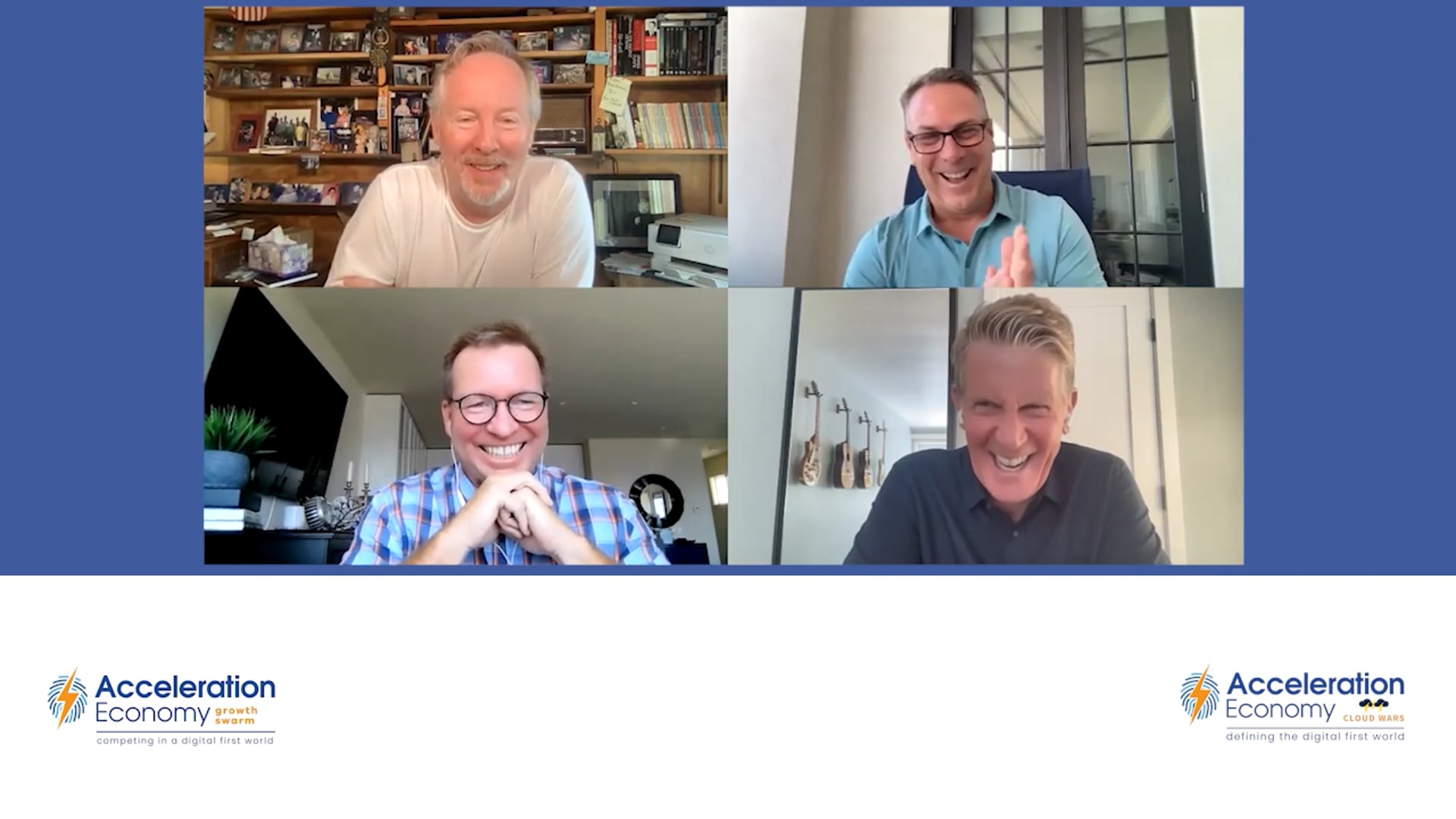 How Multi-Cloud Puts Customers at the Center of Business Strategy


In Episode 18 of Acceleration Economy’s Growth Swarm podcast, John Siefert, Bob Evans, Tony Uphoff, and Scott Vaughan discuss today’s era of multi-cloud and just how much it revolves and evolves around customer centricity. As a result, companies and industries are transforming as never before, even going as far as to partner up, “co-opetition”-style, to deliver what customers want. Even so, security concerns haven’t gone away, nor have feisty startups aiming to disrupt the status quo with groundbreaking innovations. There’s never a dull day in the Cloud Wars, as will become abundantly clear after listening to today’s episode of Growth Swarm.

00:12 – John introduces Scott, Tony, and Bob, and zeroes in on today’s topic, which covers “what’s happening in the multi-cloud era.”

01:18 – Bob recaps how Larry Ellison chose to use the fiscal 2023 Q1 results call last week to make the point that for Oracle to maintain its dominance in the database market, it must make its database available on all the clouds. Bob cites recent “sweeping and transformative” deals that Oracle has made with Microsoft and AWS as examples of this interoperable, multi-cloud strategy.  Culturally, strategically, and even in terms public perception, Oracle is willing to do a lot to give customers choice in this multi-cloud era.

03:58 – Tony says that even though Oracle’s heritage as a company hasn’t been about partnering and competitions, “the shift from checkers to chess as the multi-cloud game starts to play out…is one of the most fun things in the technology arena.” The main significance of the multi-cloud model is that it puts the customer in the driver’s seat, with ultimate flexibility for the customer. It’s an era of customer centricity. At the same time, interoperability at this breadth and scale increases complexity; decision-making isn’t binary or simple, which brings some risk to leaders who have to think through a multi-cloud world.

06:27 – Among the risks, John points out, are security vulnerabilities. AppSec strategy now demands consistency across multiple clouds. And with databases and customer centricity comes data – business data, financial data, customer data – which means that the CIO and CISO play a big role in today’s organizations (and the C-suite).

08:27 — Scott is a little skeptical about how the Oracle multi-cloud strategy will play out, that it might be tough to get all the players working together. Even so, there is no choice but to move forward, and “the glue” is co-creation.  “Now, if you do have multi-cloud, applications, and different providers, your co-creation of what you as a business or technology leader can create within the ecosystem goes up exponentially,” Scott says.

10:20 – John recaps a conversation that he and Cloud Wars Horizon analyst Tom Smith had with IBM’s Hillery Hunter, who co-authored a new report by the IBM Institute for Business Value around the premise of deep cloud, which is less about the top layer of what happens in your digital transformation in your cloud migration than it is about what happens below the surface. Even in this context, digital transformation will look much more like a multi-cloud environment process. Regardless, it’s notable that companies like IBM are also now going through a resurgence around cloud strategy.

12:30  – Bob points out that Hillery Hunter’s three titles – IBM Fellow, General Manager of Industry Clouds, and CTO, IBM Cloud – are indicative of what big companies are doing now. Not too long ago, each of these roles would have been held by different people who likely wouldn’t talk with each other. “Now, you see these things become beautifully intertwined, almost like a DNA strand,” says Bob. “Because that’s the way that customers are demanding things, so that even big companies like IBM are finding that nimbleness to follow that and remake themselves in the image and likeness of what their customers want.” Companies aren’t standing still; they’re remaking themselves constantly.

14:01 – Tony and Bob talk about how the “lift and shift” era of cloud is evolving into something much bigger and more transformative, encompassing everything from application development to acceleration,  innovation, growth, customer intimacy, and more. Technology and cloud have moved from being just a cost center to be ground down to an indispensable investment.

15:52 – John talks about how almost every company is a technology company today, even if its main business isn’t technology. A tire manufacturer may be in the tire business, but the way that it distributes and delivers tires is inextricably intertwined with technologies like IoT and AI running across multi-cloud environments. By the same token, the multi-cloud environment is opening the door for new disruptive startups to challenge Azure, Google, and other big players. Rising Cloud, for example, has created a whole new category – Workload as a Service – to deliver the same scale and availability as, say, AWS, Azure, or Google Cloud, but at a fraction of the cost.

18:13 – Scott reiterates that today’s multi-cloud environment is truly transformative. “This isn’t about technology being moved, maximized, and optimized,” says Scott. “Yes, that comes with it, but it’s the application and access. I’m looking forward to hearing about [companies like Rising Cloud] being disruptors that push everybody to be better.”

22:41 – In response to John’s question about the future of multi-cloud, Bob reiterates that it’s all about customer choice.

24: 10 – John wraps up the episode by noting that it’s a big sign of the times if Larry Ellison is talking about customer choice and multi-cloud.