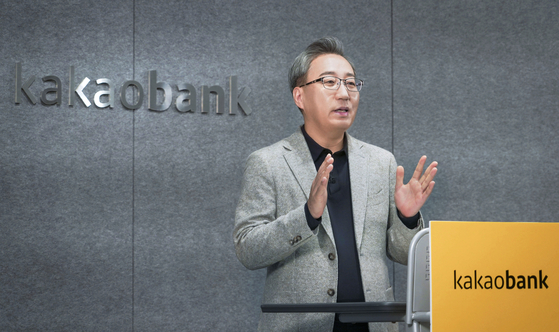 Kakao Bank, the biggest online bank, is aggressively going into the mortgage market.

Interest rates on its mortgages are lower than those offered by major commercial banks including KB, Shinhan and Hana, and it is waiving penalties on paying off the loan before it matures for the rest of this year.

The entire process will be done online.

“Customers will be able to enjoy the same convenience with mortgages that they experienced with unsecured loans when we opened in July 2017,” said Yun Ho-young, Kakao Bank CEO during a press briefing Tuesday.

The variable annual rate offered by the online bank as of Monday is 2.989 percent.

The rate on similar mortgages from major commercial banks is 3.58 percent.

Kakao Bank said its policy will be to offer the lowest interest rates in the industry.

Penalties on loans repaid early will be waived until the end of this year.
Whether to extend the waivers will be determined accordingly to the market situation, the bank said.

The bank said it plans to offer low-interest mortgages for purchases outside the greater Seoul area and raise the ceiling.

Loan applications will be conducted virtually.

Kakao Bank plans to use chat bots for applications.

The real estate contract that is required in the application can be submitted through photo images.

Rival Toss Bank was the first online bank to offer such loans. Toss Bank announced its plan on Monday.

The loan application is done online and the amount and interest rate will be determined accordingly to a credit score system developed by Toss.

Kakao Bank plans to offer loans to small business owners in the second half. The other online bank, K Bank, will offer them in the first quarter.