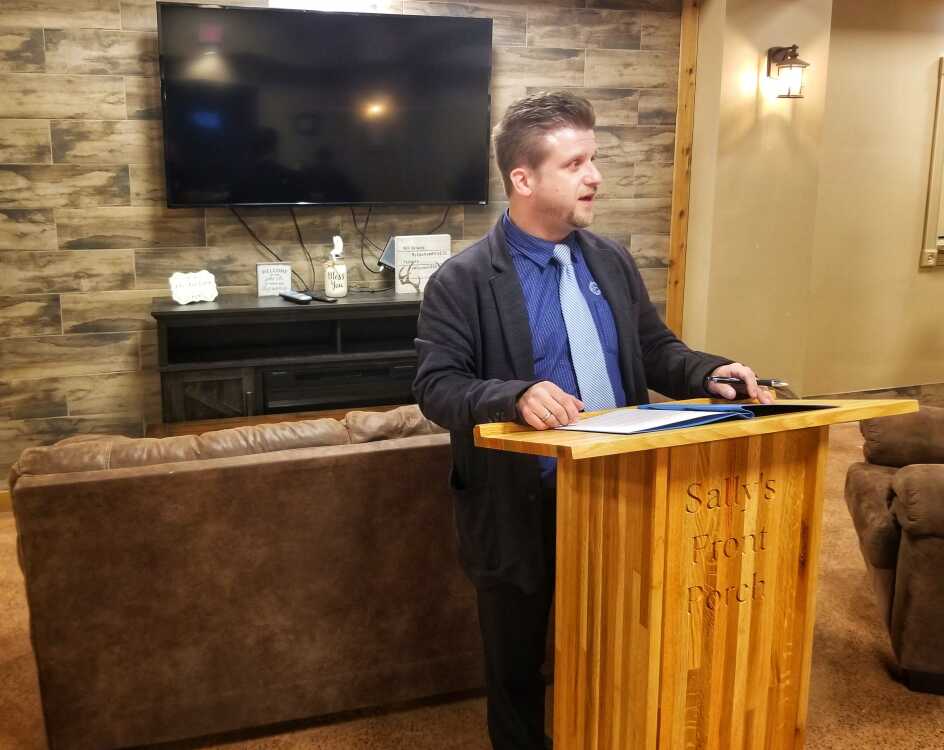 Scott City administrator Mike Dudek explains the need for a use tax during Thursday’s monthly breakfast of the Scott City Chamber of Commerce at the Front Porch Rental Hall. Scott City’s first attempt at passage of a tax on online sales failed in November by a 24-vote margin out of 362 total votes cast.

Mike Dudek, Scott City administrator, said the issues are simple as the municipality makes a new attempt to pass a 1.75% tax on online sales in the April 5 election.

“If the [levy] passes, it’ll help out our bricks-and-mortar businesses who will be on a level playing field with online retailers, like Amazon,” said Dudek. “At the municipal level, passage will help us with employee retention.”

Scott City’s government has 40 full-time employees with another 10 working on a seasonal basis.

“If we don’t succeed, we’ll likely have to reduce staff, which in turn will mean less services to the public,” Dudek said.

Dudek told Thursday’s monthly breakfast of the Scott City Chamber of Commerce “it’s going to be hard without [the tax].”

Get our Daily Headlines

Sent right to your inbox.

Dudek estimated an approved levy should bring $200,000 into city coffers.

“It could even be higher because I know Cape Girardeau found out revenue from its use tax approval last fall will be more than anticipated, which is fantastic.”

Scott City’s first try to pass a use tax in November failed by two dozen votes, as the initiative was defeated 193 to 169, 53.3% to 46.7%. Only 6.3% of registered voters in the county turned out for general election.

The city’s online sales levy was alongside a countywide quarter-cent increase proposed to provide central dispatching of emergency services.

“I think this was a key thing that hurt by having two tax issues on the same ballot, and there wasn’t a great deal of information out there about the other one — so everything got a bit muddied in November.”

“There are actually some people who said they would help out with yard signs this time around,” said Dudek, who said residents should again expect a low-key campaign.

“We’re not permitted to use city funds for a campaign but with hoped-for private help on signage and other marketing, presentations in the community and utilizing our website, we hope for a different result. We were so close last time.”