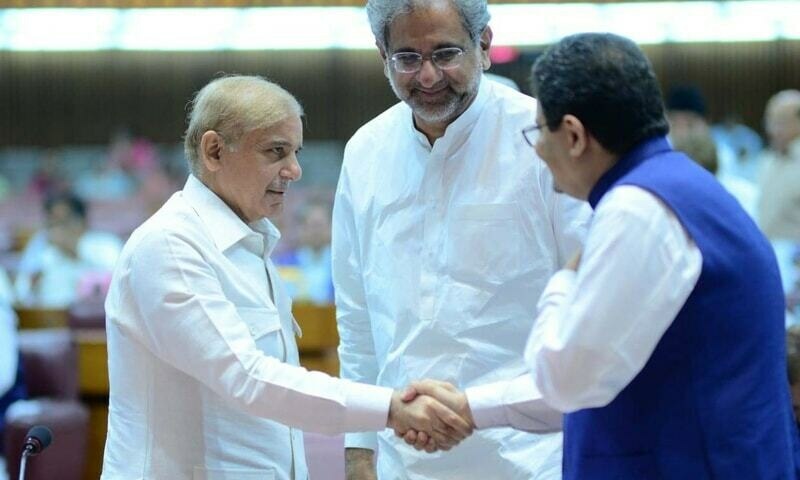 ISLAMABAD: Unlike most previous budget sessions, the coalition government on Friday announced its first federal budget for the year 2022-23 without facing any resistance and uproar from the opposition.

What was also rare was Finance Minister Miftah Ismail, while announcing the budget, saying “the government will continue all the projects launched by the previous PTI regime”.

The minister faced no difficulty in presenting the budget, as the tiny opposition, headed by PTI dissident Raja Riaz, avoided creating any commotion, and remained calm during the speech.

According to the agenda issued by the National Assembly Secretariat, the budget session was to commence at 4pm, but started half an hour later.

Before the session, Prime Minister Shehbaz Sharif presided over a meeting of the parliamentary parties to take all the allies of the government into confidence. He later joined the house as soon as the finance minister began his budget speech at 4:50pm.

Mr Ismail, as the finance minister, had also presented the last PML-N government’s budget in June 2018, though back then he had to face a pandemonium when the then opposition, led by the PTI, created mayhem and made it difficult for him to deliver the speech.

After winding up his speech on Friday, the minister walked over to Prime Minister Sharif and shook his hands. The PM congratulated Mr Ismail for presenting a “public-friendly” budget.

The PTI MNAs, who had resigned from the assembly, were expected to appear outside the Parliament House and stage a protest, as they did on Thursday when the Economic Survey was presented. Therefore, heavy contingents of police, the Frontier Constabulary and Rangers were deployed to avoid any untoward incident.

Later, Prime Minister Sharif again congratulated the finance minister and his entire team on the presentation of a “balanced, progressive and pro-people budget”. In a statement, PM Shehbaz Sharif said that in the difficult economic circumstances, the coalition government presented the “best possible” budget, which showed its sincerity and capability.

He thanked the allies, members of the cabinet and the business community for their suggestions, opinions and guidance. In the budget, he said, the rich were asked to render sacrifices, while weaker sections of society were given financial assistance.

“The well-to-do people have to act like a big brother to share difficulties of the poor.” Shehbaz maintained the budget was reflective of fiscal discipline, tax reform, bold targets and relief for the salaried class. The scheme of cheap petrol and diesel would continue for the whole year, he said.