The commissioner is said to be negotiating a new contract. What does it say about him and the NFL’s future? 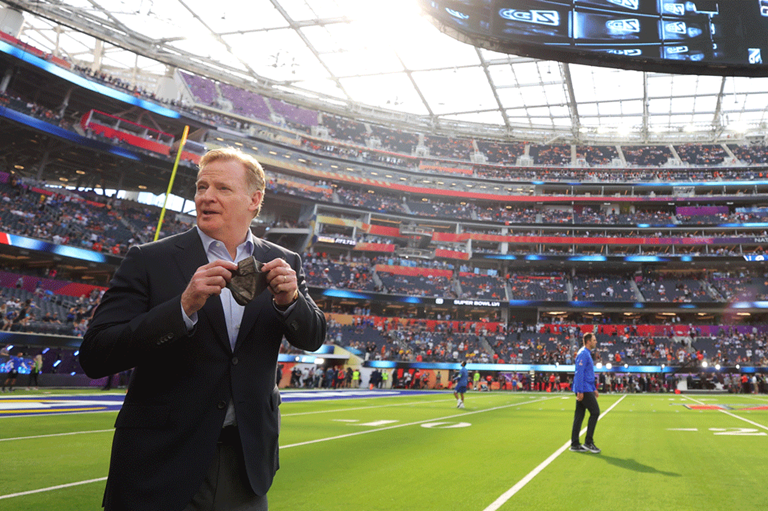 Roger Goodell’s current deal runs until March 2024 and has paid him a reported $63.9 million each of the past two years.getty images

Roger Goodell is negotiating a contract extension for the fourth time, sources said, believing it is likely the NFL commissioner will have a new deal in place in the coming months.

The NFL team owners’ desire to renew Goodell’s contract marks a big vote of confidence in his leadership through the pandemic and can be seen as a sign of his own growing confidence and security in the role since the last deal he signed in 2017.

“He’s at the top of his game right now,” said one owner. “Why would we want him walking out the door?”

The NFL denied negotiations are occurring. “There is no truth to this report,” said Brian McCarthy, league vice president of communications.

If completed, a new deal would upend the conventional wisdom that Goodell would leave shortly after the 2020 collective-bargaining agreement with the NFL Players Association and the 2021 media rights deals. When he signed his last extension in 2017, then-NFL spokesman Joe Lockhart stressed that this would be Goodell’s last contract, though Goodell himself never said that. Goodell turned 63 on Feb. 19.

Steps toward a new contract can also be viewed as a recognition that he lacks any obvious successor. Internally, Chief Media and Business Officer Brian Rolapp long has been seen as Goodell’s most logical replacement, but insiders say he has more work to do to woo owners.

Sources said Goodell’s negotiations are centered on extending his current deal for between two to four years beyond its expiration date of March 2024. He reportedly made $63.9 million in each of the past two seasons as part of his current incentive-laden deal. The economic framework of a potential new deal is unknown.

These discussions include none of the rancor that accompanied his 2017 extension, which triggered one of the largest intra-league disputes in years. This time, Goodell can expect to receive overwhelming support for an extension, sources said.

First elected by the owners in 2006, Goodell’s contract was extended in 2009, 2012 and 2017. Over time, his compensation has grown dramatically, though the current deal shifted most of his income from base salary to incentive plans.

Goodell came to this negotiation with additional leverage thanks to a string of major commercial successes. He managed to avoid any lost games to the COVID-19 pandemic, signed $110 billion worth of deals with broadcasters, ensured labor peace through the 2030 season, and the league just posted a 10% gain in viewership.

Also, Goodell appears to be benefiting from a changing dynamic that has put owners themselves, not him, in the crosshairs of recent public criticism. Public outcry over the NFL’s poor record on minority coach hiring has shifted, with more awareness that owners make those decisions. Some say Goodell has sought to accelerate that shift, pointing as his example to his Feb. 5 memo to teams when he said “we must acknowledge” that diversity efforts on coaches “have been unacceptable.”

Recent sensational allegations against Miami Dolphins owner Stephen Ross and Washington Commanders owner Daniel Snyder — not to mention last week’s bombshell ESPN report about sexual harassment allegations in Dallas — have served to further shift attention to them and away from the commissioner’s office, though the league’s handling of those matters remains a risk point for Goodell.

The lack of a clear successor is a factor, and Goodell himself has played a role in that, sources said.

The only two people to be given the title of chief operating officer since Goodell himself — Tod Leiweke and Maryann Turcke — left the league, and the position has remained vacant since August 2020. Little has been done at the ownership level to prepare for succession, so even those owners with lower regard for Goodell recognize they need to buy time.

Furthermore, the very nature of the commissioner’s position may be up for review post-Goodell.

There have been growing discussions of the possibility of splitting football and business leadership between two people, as well as the imperative to seriously consider women and minority candidates.

Editor’s note: This story is revised from the print edition.