Parties and a Sense of Normalcy (Finally?) Returning  – Commercial Observer


As the sun set on Valentine’s Day 2022, many attendees at the Mortgage Bankers Association’s CREF 2022 conference in San Diego, Calif., did something that they hadn’t done in quite some time: attended an in-person industry party.

ACORE Capital continued its popular pre-pandemic tradition of hosting its cocktail reception on a yacht — a Fountaine-Pajot Motor Yacht 40, to be precise — docked just outside of the Manchester Grand Hyatt San Diego.

ACORE executives, including Warren de Haan, Chris Tokarski, Tony Fineman, Kyle Jeffers and Eric Ramirez, welcomed guests onboard, with a selection of appetizers and beverages on offer and Fineman playing DJ throughout the night, and taking requests (country music was the genre of choice). The boat was stationary, and attendees didn’t stray far, either — enjoying the warm temperatures and good company, as well as the view from the boat’s bow, into the late hours. 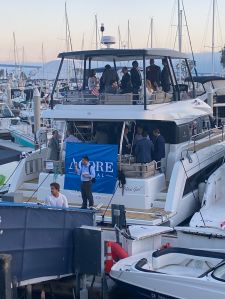 Earlier in the day, Meridian Capital Group hosted its famed  luncheon, with roughly 520 attendees cramming in to be part of the action, fuel up and listen to speaker Mick Ebeling.

Tuesday morning kicked off with rain and chilly temperatures in San Diego, with some attendees clearly in shock that “It’s always sunny in San Diego” is, in fact, a fallacy.

Stacy Ackerman, partner at K&L Gates, moderated the “Industry Roundtable: A Capital Source Conversation” panel bright and early, where experts discussed both the sunnier skies and looming clouds over the real estate industry.

Stephanie Wiggins, head of agency lending production at PGIM Real Estate, said there are few frothy spots bubbling in the market right now. For example, multifamily is “on fire” with fundamentals stronger than ever and supply is not keeping pace with demand in the affordable space. “We’re not seeing any weakness, but it’s cyclical, so it’s coming,” Wiggins said. “But, will we see a shift in credit culture? I hope not. There’s capital out there for all asset classes and at all levels.”

Like several other panelists at the conference, Jack Gay, global head of commercial real estate debt for Nuveen Real Estate, said that one of the biggest headwinds buffeting the industry right now is staffing issues. While Nuveen had a record-setting origination year in 2021, “one limiting factor for our volume was just the ability to process [deals].”

Wiggins concurred, saying the first line of defense has to be employee retention, and PGIM is prioritizing providing home-grown talent with new opportunities for growth.

Indeed, with the past two years severing some of the ties that would normally bind new employees to their company and its culture — such as in-person collaboration, teamwork and mentorship — employers are having to work doubly hard to retain top talent.

Patrick Mattison, president and COO of KKR Real Estate Finance Trust, said he’d never seen someone leave an organization for money alone. “There are several factors in that decision, but we’re focused on creating a culture that people want to be a part of,” Mattison said. “It’s hard to build a culture if people aren’t in the office.”

The panel wrapped with Ackerman asking panelists what’s keeping them up at night.

Christine Chandler, chief credit officer and COO of M&T Realty, said that concerns around property values are what’s interfering with her REM sleep cycle, but confidence in her team and all they do with M&T’s portfolio soothes her back to sleep.

Gay again emphasized the human capital challenge, with the “people piece of the puzzle” being frequently on his mind, as well as geo-political risks. Otherwise, he said, “the industry is in pretty good shape. Real estate is an inflation hedge, with capital flowing into the sector and we’re on really good footing.”

Here’s to sunnier skies ahead!

Cathy Cunningham can be reached at ccunningham@commercialobserver.com.