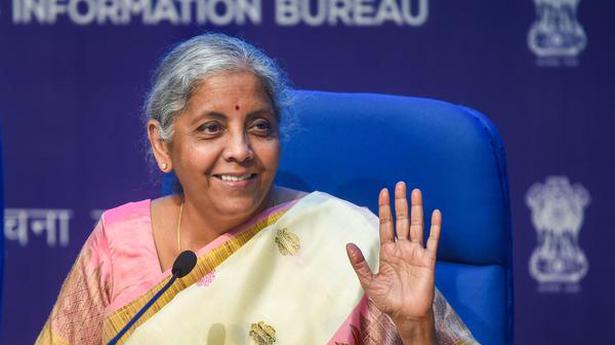 Union Finance Minister Nirmala Sitharaman on Tuesday sought to underscore how the government has not lost sight of reining in inflation even amid a higher fiscal deficit projection.

“Every Budget does not speaks explicitly about inflation and its impact. Of course, if you are talking about numbers, credit, liquidity and also supply and demand of essential goods and other you keep in mind inflation,” she said at the customary post-Budget media briefing in Delhi.

On how middle class expectations of additional relief in income tax were shattered, the Finance Minister, switching to Hindi, said, “I did not increase tax last year and this year [too]. I did not make any attempt to earn even one paise additionally.” Prime Minister Narendra Modi had repeated the instruction he gave last year that irrespective of fiscal deficit increasing, people should not be burdened with (additional taxes) during a pandemic, she added.

To another query, Ms .Sitharaman said she did not want to sound cynical by saying that no increase is in itself a
rahat (relief). “I am not saying that. There are times when you can give [tax relief], there are times when it will have to wait a bit longer. I am sorry it didn’t happen. Nevertheless, the middle class still stands to benefit from the number of schemes and support measures unveiled for other sectors,” the Minister said. “Isn’t there middle class among farmers, in MSMEs, [beneficiaries of] affordable homes, senior citizens, haven’t they got relief,” Ms. Sitharaman asked.

On the contentious issue of privatisation of two banks, which has faced massive opposition from employees and influenced the decision of the government to table the Bill, she said the Budget continued with a holistic policy approach unveiled in the previous edition.

“It is inclusive of privatisation that you are talking about. We are continuing that agenda. I said Air India [divestment], have done that,” she asserted.

On the Budget proposal to levy tax on profit from digital asset transactions, the Finance Minister said it would not apply to the digital currency that the RBI will issue this year.

Without specifically referring to NFTs (non-fungible tokens), which are mentioned in the Finance Bill, Ms. Sitharaman said: “Everything [that] prevails outside of [digital currency] are digital assets, which are being created by individuals and in transacting that assets if profits are being made, we are taxing that profit at 30%. We are also tracking every trail of money in that by saying every transaction will (attract) 1% TDS in the crypto world.”

On the need for regulation, the Finance Minister said, “We have circulated a [discussion] paper, inputs are coming in, public stakeholders are also talking about it. So regulation goes through that process. I can’t wait till regulation comes into place for taxing people who are earning profits, can I?”

Regarding another proposal to impose an additional basic excise duty of ₹2 a litre on petrol and diesel, intended to be sold to retail consumers without blending, from October 1, 2022, the Minister and Revenue Secretary Tarun Bajaj said the intent was to encourage blended fuel.